Dakar 2020: Al-Attiyah and Al-Rajhi handily-placed in second and fourth after first week of Dakar Rally

Overdrive Racing and Toyota Gazoo Racing are firmly on course to retain their Dakar Rally title at the rest day in Riyadh after six special stages of the event’s first visit to the Kingdom of Saudi Arabia.

The defending champions, Nasser Saleh Al-Attiyah and Matthieu Baumel, hold second overall in the first of four Toyota Gazoo Racing Hiluxes and are ideally positioned for a major push over the second week before the event finishes in Qiddiya on January 17th. The Qatari trails leader Carlos Sainz by 7min 46sec and has an 8min 32sec cushion over third-placed Frenchman Stéphane Peterhansel. 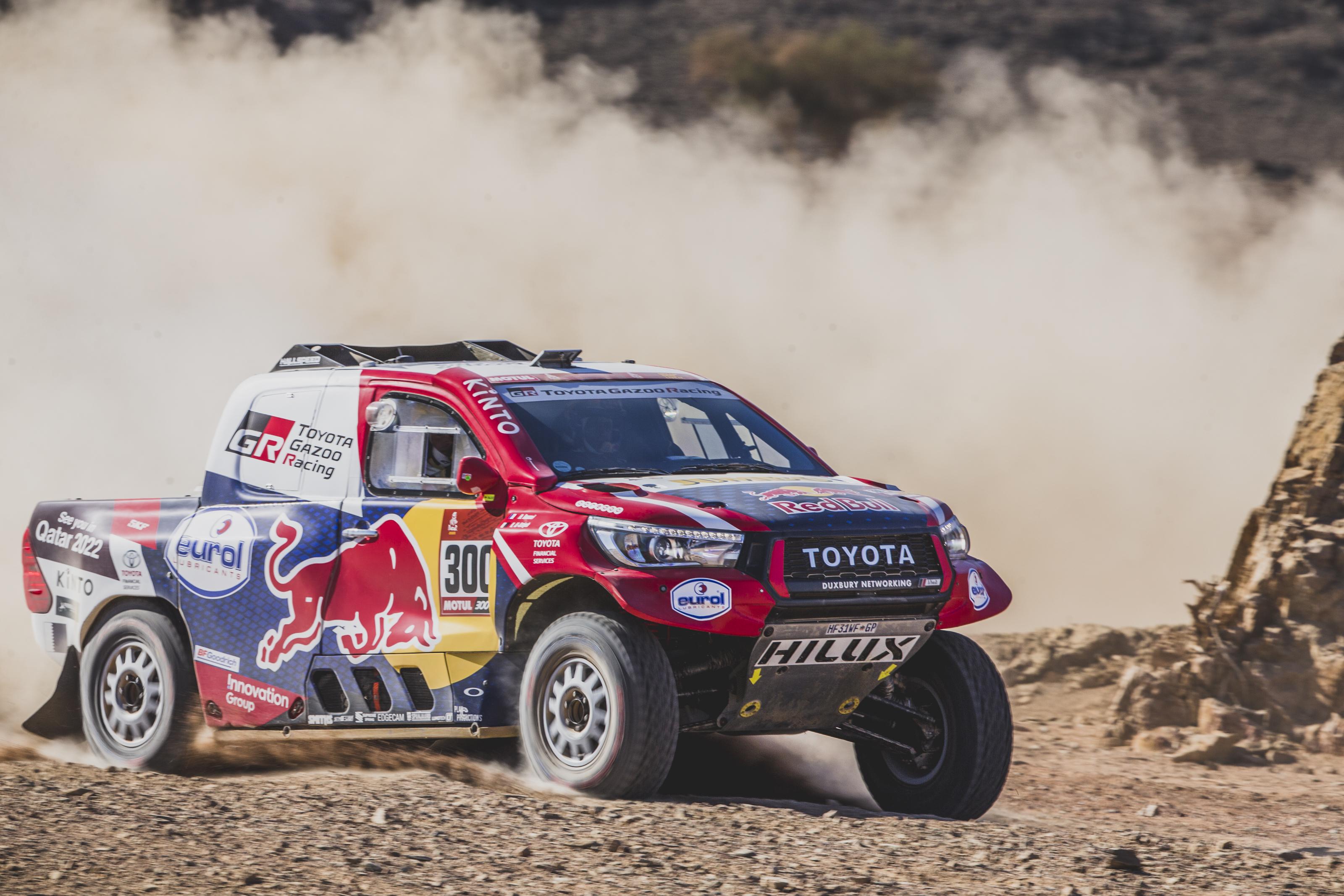 Overdrive Racing Toyotas currently occupy fourth, 12th, 39th and 43rd places, while Al-Attiyah’s three Toyota Gazoo Racing colleagues - Giniel de Villiers, Bernhard Ten Brinke and Fernando Alonso – are seventh, eighth and 16th overall after their own fair share of punctures and dramas during the first six days of timed action along the Kingdom’s Red Coast and through the deserts around Al Ula and Ha’il in the north-central region of the country. 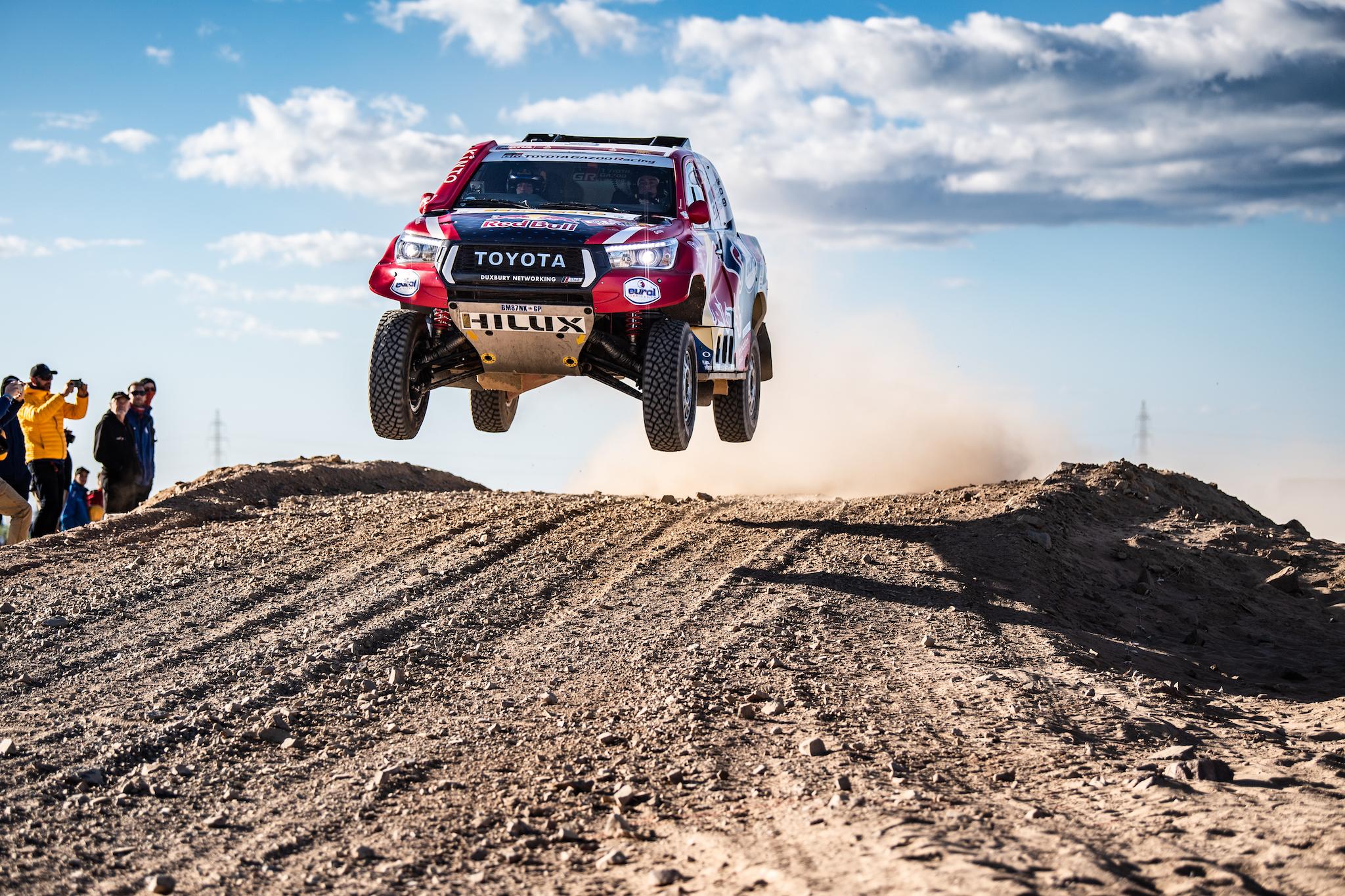 Al-Attiyah said: “It has not been an easy week. The Dakar has been difficult and we have struggled to match our rivals on some of the stages because of the nature of the terrain. I am a little disappointed because we are really going at the maximum. This is a new Dakar and I think we have been doing a really good job, despite several punctures earlier in the week. We’ve finished the first week without any problems and I am quite happy. We’ll see next week. It will be tougher. I think there will be more dunes.” 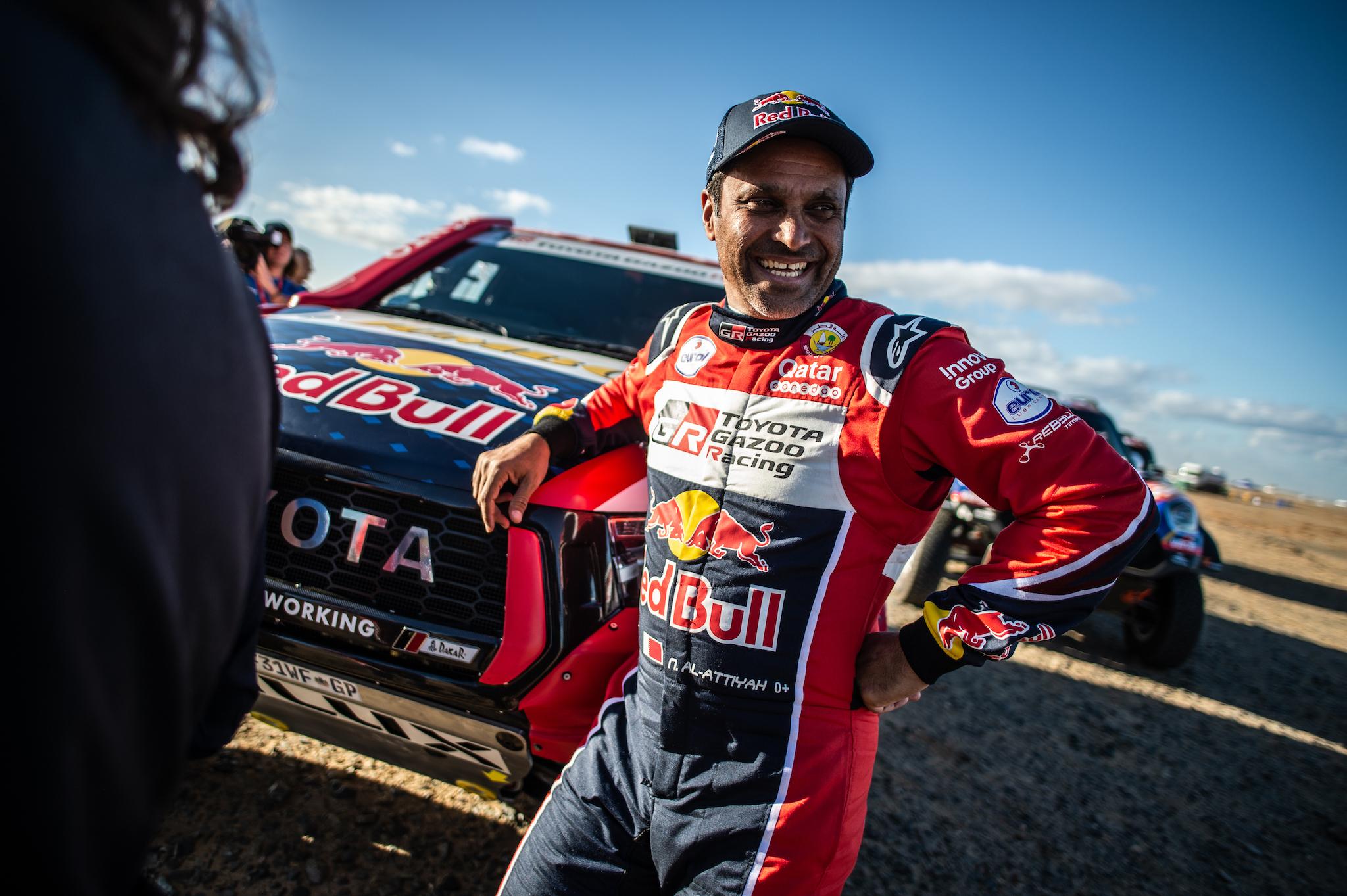 Yazeed Al-Rajhi and Russian navigator Konstantin Zhiltzov suffered flat tyres and navigational delays on the opening day in the leading Overdrive Racing Toyota and found themselves in eighth place. The local star was running fastest on the second stage, before ceding time with another navigational delay and went on to reach Neom in ninth.

The Saudi climbed to fourth with the sixth quickest time on the Neom loop stage after collecting two punctures and a damaged third tyre, and another fourth quickest time pushed the Riyadh driver up to a similar position in the rankings at Al Ula. He maintained that form into Ha’il, even leading the special for a time, and reached Riyadh in fourth place, 36min 46sec off the outright lead.

“It has been an amazing experience to be racing on the Dakar in my home country,” said Al-Rajhi. “We had some delays early in the race but have found a good pace over the last stages and we are in touching distance of the podium heading into the second week.” 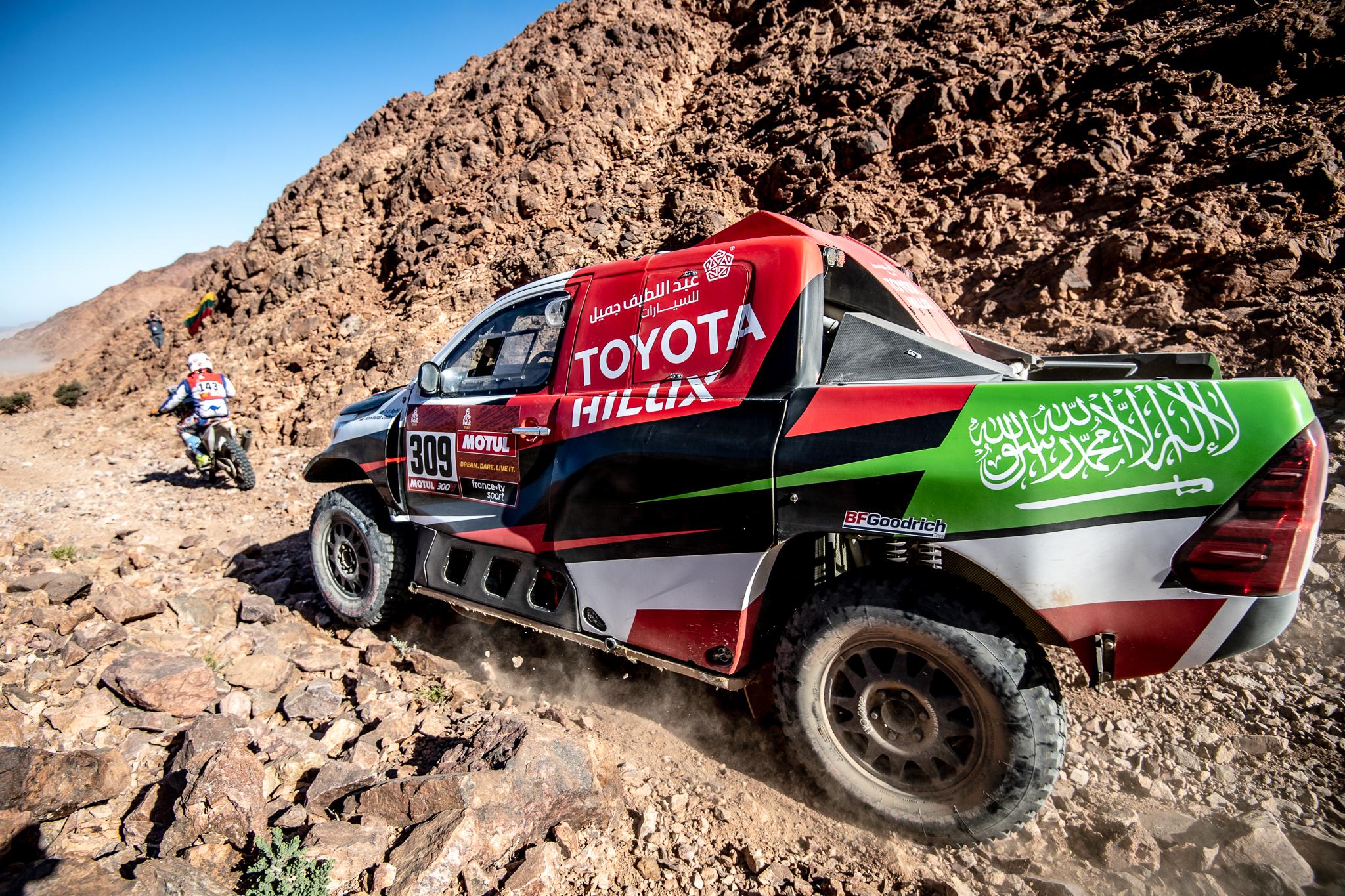 The French crew of Ronan Chabot and Gilles Pillot were classified in 18th after the opening stage in the second Overdrive Racing Toyota and maintained a solid pace over the subsequent days to hold 21st after SS2 and 16th after three stages. Chabot climbed three places to 13th into Al Ula and moved up to 12th at the rest day after several solid stage performances. 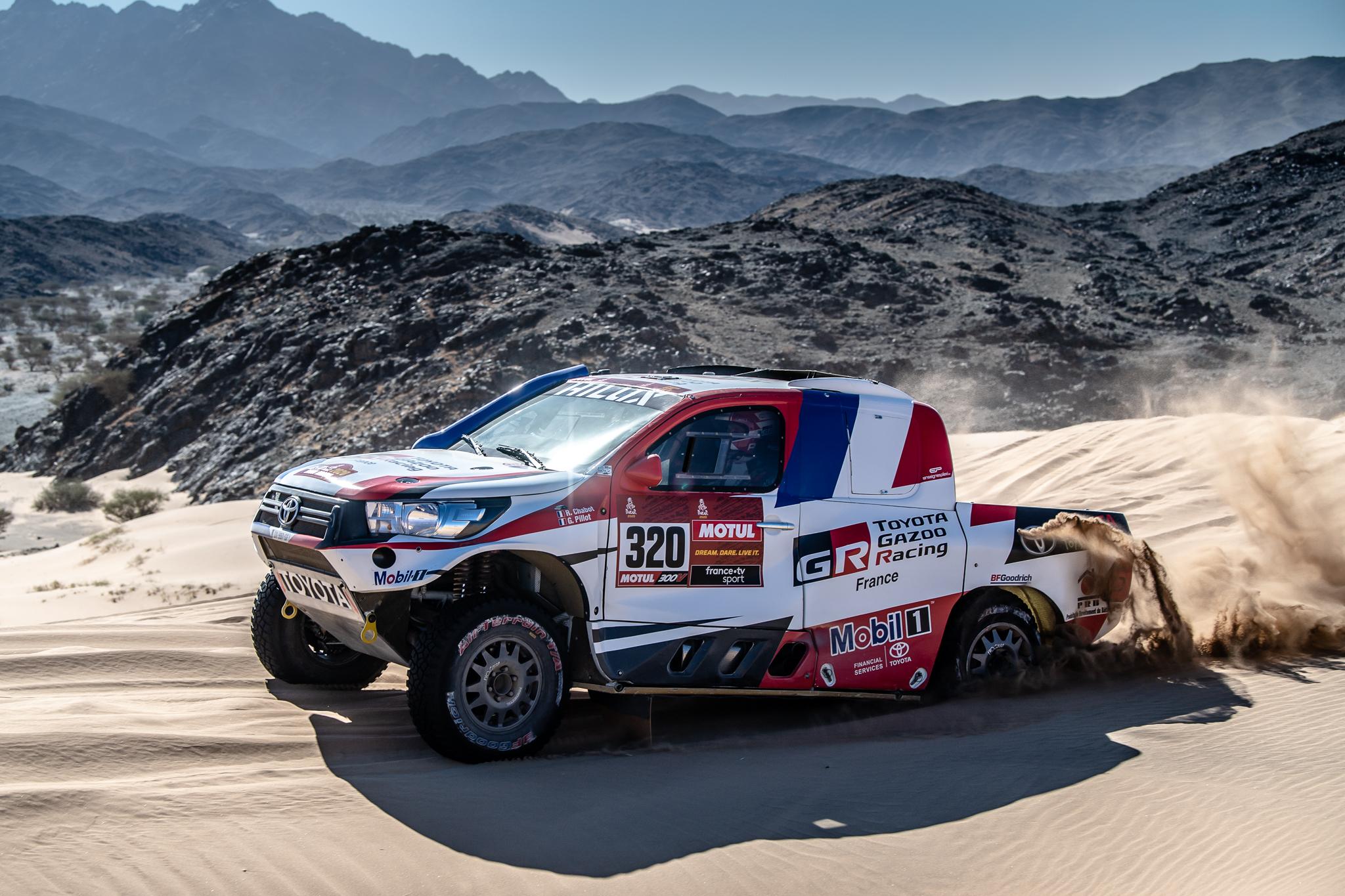 Peter van Merksteijn and new Ulster navigator Michael Orr were classified in 27th after the opening timed section in the third car, lost further time with three flat tyres on Monday and further minutes on the stage to Neom and slipped to 35th with four punctures and further delays in fellow competitors’ dust. “I guess bad luck was following us on stage four. We had four punctures and you can only take three spares with you. A big thanks to Erik van Loon for giving us a spare one.”

The Dutchman continued over the next few days, running lower down the order, and finished the fifth stage into Ha’il in 22nd place, despite starting 66th on the road. He continued the fight back and was 19th on stage six and reached Riyadh in 39th overall. 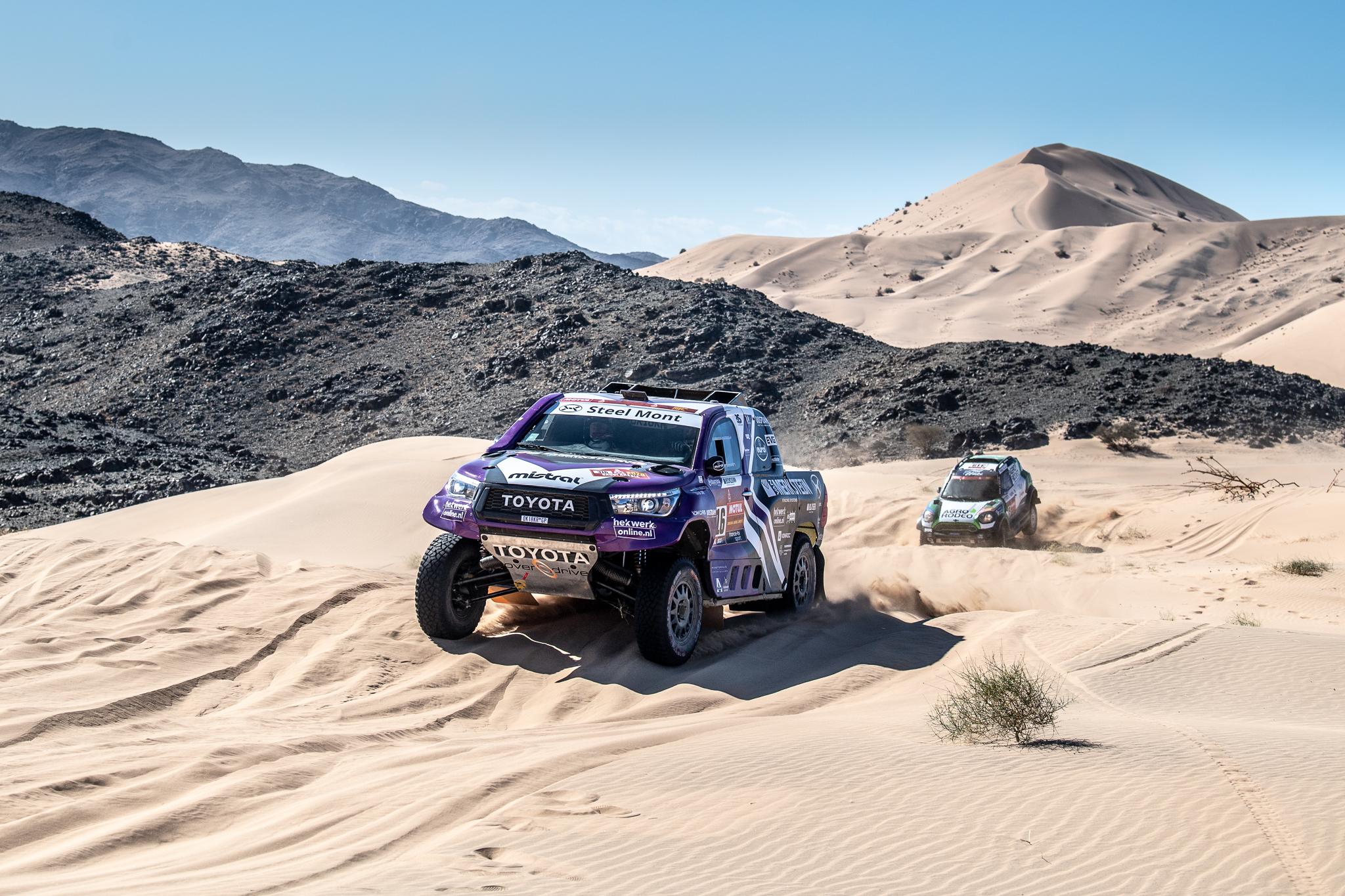 Experienced Dutchman Erik van Loon and French co-driver Sébastien Delaunay were running as high as 10th overall after the first stage, but Van Loon rolled his Toyota heavily 32km into the fourth special to Al Ula and slipped to 36th overall with the loss of over three hours. His tempestuous Dakar continued when he was forced to carry out repairs to his Toyota after 88km of the next stage, but the crew managed to continue on to Riyadh and held 43rd in the overall rankings, the pair setting the 11th quickest time on stage six. 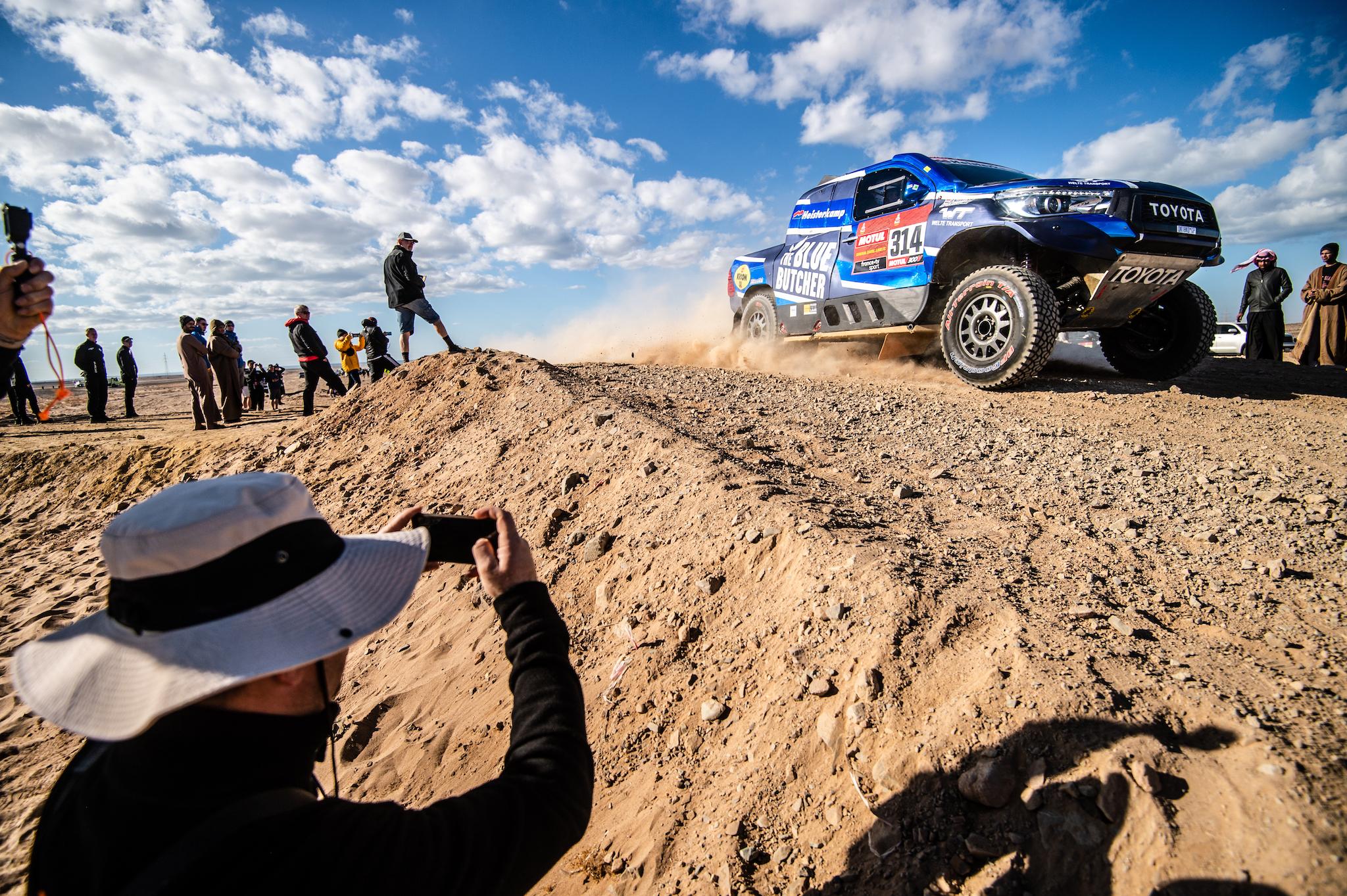 Overdrive Racing has also built cars for Spaniards Jesus Calleja and Jaume Aregall and the American duo of Texan Bobby Patton and his navigator Robbie Pierce.

Calleja reached the rest day in Riyadh in an unofficial 34th position, but Patton  - the co-owner of the Los Angeles Dodgers baseball team - rolled his Toyota heavily out of 55th overall early in the sixth stage and Pierce sustained a back injury that forced the crew out of the rally.

Dakar Rally action resumes on Sunday with a daunting special stage of 546km between the Saudi capital and Wadi Al-Dawasir, as the route heads deep into the dunes of the Empty Quarter for a second week of action in the south of the country.

Bivouacs follow in Wadi Al-Dawasir, Haradh and Shubaytah before the final stage of 374km brings the action to a conclusion on January 17th.